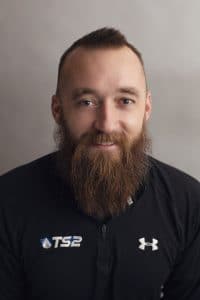 Chris Hutchison is a USA Triathlon Level I Triathlon Coach for TS2 Coaching.  Chris has been competing and coaching for over a decade, and he sees triathlon as a lifestyle that makes him a better person, husband, father, and friend.  Growing up, he played lots of different sports, but didn’t find a passion until he started swimming in middle school.  Swimming came naturally to him.  In middle school, he improved quickly and found himself training with the high school team only after a couple weeks.  Once he actually made it to high school, he found success, qualifying for state, breaking a couple of school records, and winning Sectionals in the 200 freestyle his senior year.  This success helped him earn a scholarship to swim at IUPUI, a Division I university in downtown Indianapolis, Indiana.  There, while studying to become a math teacher, he learned quite a bit about elite level training.  He was also named team captain his senior year.  It was also while in college that he discovered triathlon, and he completed his first sprint triathlon the summer after graduating college.  After that, he was hooked.  He mostly competes in sprint and Olympic distance races, qualifying for Age Group Nationals most years.  Some of his most memorable races have been placing 9th at Age Group Nationals which qualified him for Team USA at the ITU Draft-Legal Sprint Triathlon World Championships, out-sprinting a friend for the win at the Mideast Regional Championships at the Olympic distance, winning the Sprint distance race at Club Nationals, and placing 2nd and 3rd in consecutive years at American Triple T.

As a coach, he finds the science of the human brain and body when it comes to physical training fascinating.  This fascination and curiosity keeps him searching for new research and studies as to the optimal ways to train for each aspect of triathlon.  Learning new things as a coach through reading and experience is something he strives to do each and every day.  This wealth of knowledge that he has gathered over the span of his athletic career is something that he loves to share with others as well.