by Michele Prible
Comments are off

IronJoe Fazzini. This man has quickly found his way onto my personal Mount Rushmore of heroes.  He will often times say that he knew TS2 Coaching was a good fit for him when I never batted an eye at his goal of becoming an IRONMAN.  I dare any of you to look him in the eyes and doubt him.  It’s impossible.  His energy, positive attitude, and indomitable will is not easily rivaled.  Get to know Joe Fazzini. 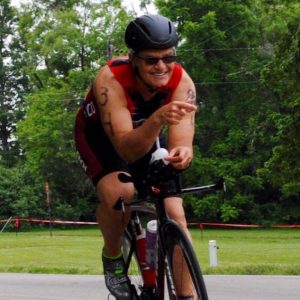 Favorite Snack/Food You Eat While Training:

As a plant based endurance athlete I eat tons of nuts, pistachios are my favorite however anything with salt will do. Salted peanuts in a shell are a very close second favorite. While training I’m very boring, gels, blocks, coke are standard stuff. I can’t live without an Avocado every day, I eat them plain with sea salt, on sprouted bread, in salads, I’ve got to have one every day. PS, I should mention I need two cups of extremely strong black coffee in the morning (large please)

Piece of Training Gear You Couldn’t Live Without:

I’ve become addicted to my Garmin heart rate monitor, it seems like every run or ride I keep looking at the variation of data, distance, heart rate, time. I’ve gotten to the point I can even tell by the heart rate data if I slept enough or had too much caffeine.

Strange routine, quirk, or mental game you do when racing or getting ready for one:

I hate waking up to train or race first thing, I guess it’s crazy for an endurance athlete to be this way. I like my two cups of black strong coffee with no TV or noise around me. It’s a ritual along with prayer time, it kind of eases me into my day. Mental game, life is a mental game. These habits I’ve developed really just happened as I’ve gotten older, kids have grown, I’ve backed out of working for publicly traded companies (80 hour weeks &200K miles air travel), unless it’s a true holy cow emergency I like to have coffee, prayer, and the pure silence of the morning.

What was your entry into triathlon/endurance training?

I did my first Tri’s in the early 90’s, a few sprints but family and work took me away from the full journey for nearly 20 years. The story goes much further back, 1976 was when I first started running on a regular basis (daily). I weighed in at 245 my senior year of high school, (mostly bad food and lots of alcohol). I started running that summer and lost 95 pounds by graduation. I bought my first road bike the following summer (77) and real running shoes after graduation and would soon be riding 75-150 mile days followed 5 and 10 mile runs a lot those early years. 500 mile weeks on the bike and 100 miles of running was normal. One of my training partner Rich Laporte in 1983 actually went on to do Kona. My life took another path and I experimented heavily with a bunch of drugs and alcohol. He went to Kona, I went to get help for my addiction. He became a Kona Ironman and I got clean from drugs in 1983. He’s still an Ironman and of course I’m still clean for nearly 33 years now. I have a feeling this year I’ll be an Ironman, slow learner I guess. I look at this part of my life as phase one, boy wakes fat and drunk, starts running and riding (hard) with dreams of being a long distance endurance athlete. Phase two, of endurance training stated back in 2001 with my first marathon, of course it was Chicago. I started running and riding again while raising two kids and a growing career in student loans collections. In 2008 my story once again took a path, a very serious path. I had been diagnosed with prostate cancer at 49. Only 1% of all prostate cancers are found before 50 years of age. I attribute that to a lifestyle of bad food and corporate stresses. Thus my transition to a plant based diet and new refocus on endurance training. I did my own research, surgery, radiation and many months androgen deprivation therapy will make a person get serious about recovery from cancer. I found my consumption of animal products (I ate steak three times per week and hundreds of pounds of chicken) actually contributed to me having early age prostate cancer. Additional research I discovered that long distance endurance training can reduce the chance of prostate cancer re-occurrence. Why not be an Ironman? I’m doing the work anyway.

Why do you keep doing it?  (What keeps you at it?)

Why? It’s a lifestyle for me. It’s for overall health and to keep fighting off the re-occurrence of Cancer. Really I can’t stop, it’s the voice that’s says time to work out, get it done. Really, I love to train more than race. I don’t really care anymore who I beat or who I pass or frankly who beats me. Young Joe yes, he would say, “compete Joe.”  Yes, he cared.  Older Joe enjoys the process more than the event. My fight is much larger, cancer is faster and stronger than any other racer I’ve met. Why? Visit an oncology unit and see the babies, the children, the young and old, the corporate executives and the prisoners in orange jump suits-they all become equal there. Cancer levels the playing field more than any aero wheel or skin suit you’ve ever seen. 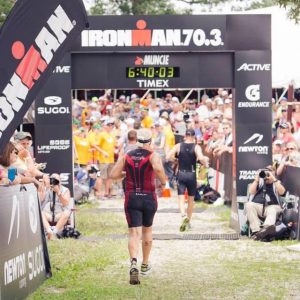 I guess I could say stuff like, finding my wife or watching my kids be born and growing to be great human beings. That’s all part of what has given me a life worth living. I cried after my first marathon, but I cried harder after finishing the marathon just after completing ADT treatment from Cancer. Everything hurt, my head, my feet, my VO2 sucked but it was a real WIN. Professionally, it’s running a large division of a Fortune 200 company with several thousand people reporting to me in higher education Company (Sallie Mae) without a college degree. I’ve never underestimated myself, others have. The Half Ironman was cool, but I feel I have epic stuff to do yet endurance wise. Dream Big, Live Big.

What have you learned about yourself from endurance training and racing?

I love to suffer, mostly by myself maybe that’s from being an only child or a (long) childhood fueled with drugs and alcohol. I didn’t really grow up until 1983, I was 24. It might not have been a good or typical childhood but it was a long one. I love to suffer, bring on the heat or bring on the cold, I’ll train in it all. Two things I hate are any type of indoor training and outside training in the rain, I’ll do both but it’s only a means to an endurance end. I hate the rain. 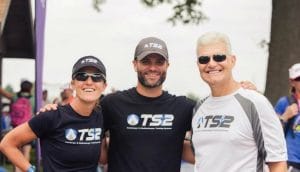 Ironman 140.6, do a long distance multiple day event and more importantly not ever having to do anything that compromises what I believe or who I’ve become. I live by a set of principles and they are too deep to write about here. They’re spiritual guiding principles, I believe in God, he has given me many lives to live and chances to get my life right.

Outside of triathlon, what is most important to you?

Family, I told you that I’m pretty boring. I live for them, my goal is to walk my daughter down the aisle when she gets married, play with my son’s and daughter’s kids, and really be part of their lives. How cool would it be to see my grandkids say, “hey my Grandpa is a frickin’ Ironman! He doesn’t need a wheelchair.”

Anything else you would want the group to know about you:

My favorite color is blue, I’m Cancer free and feel my best is yet to come.

It is a great privilege to be a part of our athlete’s stories.  It is a complete joy to support them, guide them, know them, and love them each step of the way.  Be on the lookout on www.ts2coaching.com for more stories that will most certainly encourage, challenge, and inspire you to tell your own magnificent story in 2016 and beyond! Onward and upward!

About the Author
Michele loves running & triathlon and is passionate about coming alongside others and supporting them as a coach in a wholistic fashion. She is one of the 3 coaches at TS2 Coaching.
Social Share

TS2 Coaching selects a hashtag to highlight an anchor point or motivational cue for our team every year. This year… https://t.co/c82C62pjgQ

h J R
What could you accomplish if you only believed that you could? — No, the journey I’d #improvement, #success,… https://t.co/voajZMULWA

h J R
It is our fundamental belief at TS2 Coaching that people matter–whatever their speed or experience level. It is ou… https://t.co/9aDTkVbVGJ